[Tanya Roth is a writer, historian, and high school educator with whom I’ve been very fortunate to connect through the #twitterstorians community over the last few months. This Guest Post is an excerpt from her forthcoming book Her Cold War: Women in the U.S. Military, 1945-1980, which is due out September 30th!] 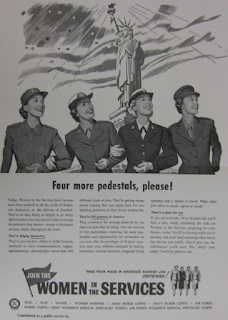 [Ad from the National Archives, Record Group 330, stored in a Defense Advisory Committee on Women in the Services (DACOWITS) member's folder.]

Four years after the Women’s Armed Services Integration Act passed, someone in recruiting decided that the first all-out campaign for womanpower should take place with the 1952 Miss America pageant. It must have seemed like the perfect pairing: the pageant highlighted the best young American women from around the nation, perfectly poised, beautiful, talented, and educated. Recruiters dreamed of signing just these types of young ladies for service in the armed forces. Military publicity officers secured a presence for servicewomen throughout the pageant, ensuring visibility whenever possible. The goal was simple: get Americans to associate servicewomen with the excellent reputation Miss America contestants had at that time and to impart a sense of glamour into Americans’ ideas of women in uniform...

From the beginning...concerns about appearances framed woman power recruiting efforts. Recruiters followed the philosophy that familiarity and femininity would be the most practical and effective ways to entice women to military careers. Military service became advertised as an avenue by which women could become not just ideal American women, but respectable ladies. This approach helped make women’s service acceptable to Americans both inside and outside the armed forces. If military service— especially in wartime—could transform boys into men, then military service could also turn girls into proper ladies. Women belonged in national defense in part because military and government officials saw them as partners in service with men, doing things women did best and capitalizing on their identities as women to do so. In these regards, staging the women’s recruiting drive in conjunction with the 1952 Miss America pageant made sense. The pageant was about thirty years old, and community service was— and still is—an important element of holding the title “Miss America.”  During World War II, the crowned Miss Americas all performed war service activities such as visiting troops and selling war bonds, their version  of supporting national defense.5 Scholar Mary Anne Schofield argues that  during wartime, such efforts “supported the propaganda machine that said  that femininity and war work went together.” In the process, the pageant itself solidified the image of Miss America as “the ideal American woman.” By 1952, if military leaders wanted a venue that would showcase servicewomen as the very best of American womanhood and service, the Miss America pageant was the place to be.

PS. What do you think? Other pageant histories, stories, or contexts you’d share?]