[On March 1, 1872 Yellowstone became America’s and the world’s first National Park. So this week I’ve AmericanStudied five other amazing National Parks, leading up to this special weekend post highlighting a new book on Yellowstone from the amazing Megan Kate Nelson!]

Just a couple weeks back, I wrote in my post on frustrating frontier myths about one of the public historians and scholars doing the best work to challenge and offer alternatives to those myths: Megan Kate Nelson. That was certainly true of her award-winning The Three-Cornered War, which radically reframed the Civil War through the lens of a truly multi-cultural Western history. And it looks like it will be even more true of her next book project, The Westerners: The True Pioneers Who Built a Region and Defined a Nation. 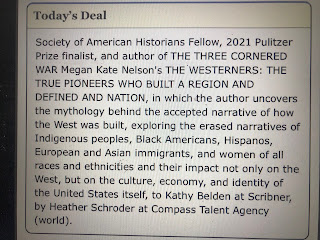 But there’s a book in between those two, and it just came out this past Tuesday in time for Yellowstone National Park’s 250th anniversary: Saving Yellowstone: Exploration and Preservation in Reconstruction America. As she did with the Civil War in Three-Cornered, Nelson in Saving Yellowstone reframes and expands Reconstruction historiography and collective memory (such as it is, which is why we desperately need more such public scholarly writing and work about Reconstruction) through the lens of this Western space and all the histories, stories, communities, and contexts to which it connects.

My copy of Saving Yellowstone is on the way, so I can’t share more specifics than that yet (but I know I’m gonna love it). But as someone working on a book project that seeks to connect striking individual stories, told narratively and engagingly, to larger American histories and issues, I can most definitely say that Nelson is a model of this vital form of public historical writing. She and Saving Yellowstone deserve our support and reading for all sorts of reasons, but that’s high on the list!

PS. What do you think?