[Dr. William Kerrigan is Associate Professor of History at Ohio’s Muskingum College. He’s the author of the wonderful Johnny Appleseed and the American Orchard: A Cultural History, as well as multiple books on local Ohio history. And he maintains the daily American Orchard blog.] 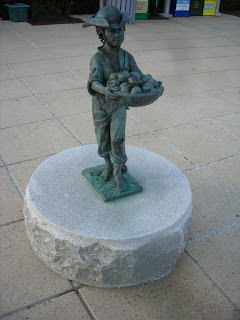 About ten years ago I found myself in an awkward situation one early June morning in Longmeadow, Massachusetts. I was early in the process of researching a microhistory of John “Appleseed” Chapman and had decided to trace his path backwards from my home state of Ohio through the Northwestern Pennsylvania communities where, as a young adult, he began planting apple trees and back to his childhood haunts in Massachusetts. I had arrived in this picturesque Connecticut River village after a night of car-camping at an interstate rest stop, and decided to go for an exploratory jog around town while awaiting the opening of the local history room at the town library. I knew there was a house still standing in the village that some historians claimed had been John Chapman’s family home, and was delighted when I was able to find it in less than an hour of wandering. It being still fairly early in the morning, and I being unshowered and clad in jogging shirt and shorts, I made the decision to snap a few pictures of it without seeking the permission of its current residents.


As I headed back toward the town green, a police car pulled in front of me and a rather irritated officer jumped out of the car and began to aggressively question me about my business. It seemed that my picture taking had alarmed the home’s residents, or perhaps one of the neighbors, and they had called the police. That my wallet and ID were back in my car at the library parking lot only made things worse. When I explained to the officer that I was actually a professor, researching a book on Johnny Appleseed, and that the house I took pictures of was alleged to have once housed Johnny Appleseed’s family, he wasn’t buying it. That Johnny Appleseed was a real person, and that he had once lived in Longmeadow was a story he was not ready to believe. As local Moms dropping kids off at school in L.L. Bean -branded SUVs crept by and gave me a wary eye, I did my best to grovel and offer sincere apologies to the angry officer. I even offered to accompany him back to the home of the startled resident and offer my sincerest apology and explanation. He eventually let me off with a stern warning and a promise he would check into my story at the library later.


The following day I encountered a much more welcoming reception seventy-five miles to the Northeast, in Leominster, Massachusetts, where John Chapman was born. There no one offered me a skeptical cock of the head when I told them I was searching for Johnny Appleseed. Perhaps this should come as no surprise, as Longmeadow and Leominster are today two very different kinds of communities.  The median family income in Longmeadow is nearly twice that of Leominster, which maintains a more working class feel, and John Chapman was of humble origins. His father Nathaniel, orphaned at fourteen, struggled financially all of his life. Twice he married women above his station, thus temporarily raising his standing before falling on further misfortunes. In Leominster he wed Elizabeth Simonds, from a prominent local family, and the young couple appear to have begun their life together on Simonds family land. The couple were admitted to membership in the local congregational church when John was still an infant and his father was home briefly from military service in the Revolutionary War. Elizabeth died when John was not yet two and Nathaniel was away at war. The young John spent his earliest years in the care of Simonds family relatives in the Leominster area.


In 1780, after a discharge from the army, the still-poor Nathaniel Chapman wed Lucy Cooley, from one of Longmeadow’s reigning families, and the couple set up a home on Cooley land she had inherited. Lucy and Nathaniel were poor and stayed poor, eventually forced to sell their small farm to pay a tax debt. They did not seem to make much of a mark on Longmeadow, and when they and their passel of kids left for Ohio in the winter of 1803-1804, almost no one in the town seemed to notice.  And today in this prosperous community of strivers, the one-time presence of the woe-begotten Chapman family continues to be mostly unnoted.


In sharp contrast, Leominster and the North Central Massachusetts region celebrate the life of John Chapman in numerous ways. If you are visiting Leominster and Johnny Appleseed Country, I’d encourage you to check out these sites:


Johnny Appleseed Statue inside Leominster City Hall.  This remarkable statue was carved from the trunk of a local tree, and eventually relocated inside City Hall to protect it from slow decay. The words at the base, “Sowing West,” almost became the title of my Johnny Appleseed book.


Sholan Farms. Located atop a ridge that probably had apple trees growing on it during John Chapman’s childhood, this was the site of Leominster’s last commercial orchard. When that orchard went up for sale in 2000, a group of community activists persuaded the city to purchase the land, and the Friends of Sholan Farms have managed it as a community orchard ever since.


Fruitlands Museum, Harvard, Massachusetts. Located on the site of Bronson Alcott’s short-lived vegan utopian community, the Museum preserves that story and also serves as an art gallery and summer concert series location. While there is no evidence that Bronson Alcott and John Chapman even knew of each other’s existence, it is my contention that the two were kindred souls in many ways, and both products of the utopian and perfectionist impulses of their era.


PS. Other daytrips you’d share?]
Posted by AmericanStudier at 3:00 AM