[On April 19th, 1897, the first Boston Marathon was run. So for the 125th anniversary of this iconic road race, this week I’ve AmericanStudied a handful of Marathon histories and contexts, leading up to this special Guest Post from my favorite RunningStudier!]

[As I wrote in this post, one of the best things I’ve done in my career was reaching out to Tiffany Chenault to be a co-leader of the SSN Boston Chapter. A Sociology professor at Salem State University and one of the leaders of higher ed faculty unions throughout the state, Tiffany is also a very serious runner (she’s completing a project to run a half-marathon in every state) and an equally series studier of running and race. I’m really excited to share some of her thoughts and work in this Guest Post!] 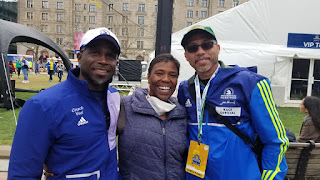 I could not believe I was participating in the 126th Boston Marathon. This was something that was never on my bucket list. To be honest I didn’t know anything about it (Boston Marathon) until I moved to Boston in 2005. I learned through my white colleagues that everyone goes to watch the Marathon on Patriot’s Day. It was the ultimate tailgating event, I was told. That was how it was framed to me. The black friends I met in Boston, could have cared less about the Marathon. They never went downtown on Marathon Monday and they were a bit indifferent about it. It meant there was more traffic downtown. Also, in reality, their Boston neighborhoods were not impacted. I should say, their neighborhoods were excluded from the signs, banners, and advertisements which celebrates the arrival of the marathon and the runners. Those items I would see in the middle/upper-class white neighborhoods of the city. This was my first experience with the Boston Marathon.

Fast forward ten years later when I would become a runner. This was an identity that I never thought I would claim or imagine ever saying those words out of my mouth.  The loss of my mother and my grief led me to running as an outlet for healing. As I was running and healing, the sociologist in me started to look around my new running space and realized the whiteness of this space. Where were the other black women who looked like me that ran? This was a question that developed the more I ran, the more I healed, the more my sociological inquiry developed.

I started off with 5k (3 miles), 10ks (6 miles), half marathons (13.1 miles) and later built up to my first marathon (26.2 miles) in 2015.  For me, if I was going to run one marathon in my life, I was going to do it in my hometown and in the place my mother was buried. The Flying Pig Marathon in Cincinnati, Ohio was my first and I thought was my last marathon. For all the time, energy, money, sweat, and pain you go through, I wanted the marathon I chose to mean something. I wanted to have a connection to the place, the space, and the people. Even in that race, I saw more black women running but we were still a small minority within the minority of the less than 1% of the U. S. population that has run a marathon. Again, I never thought about or had a connection with running the Boston Marathon.

Exploring the research, literature, and social media on running, running, culture and the industry, I discovered that women/female runners are always white. Black women and other women of color were hardly mentioned or studied. When race is discussed in the running space, it usually revolves around black men. When people think of black marathoners, they are thinking of the elite, African runners, who come from countries such as from Kenya and Ethiopia, Morocco, and Algeria. Yes, they are black but they are not African-American domestic runners. What was missing and invisible, were the intersectional experiences of black women runners. It became important to consider the social location of race, gender, and social class that black women experience in running through their lens and ideas.

I found that recreational long-distance running, and the running industry in general, are primarily spaces for white women, white men, and “Africans.” I wanted to know why. On my personal journey of running and healing I wanted to explore why Black women were invisible and use my voice to make us visible.

To answer these questions, I started a research journey of running a half marathon in every state. I sought out and found a community of black women who ran. From 5ks (3 miles), marathons (26.2 miles), ultra-marathons (30 miles are more) and everything in between. As a sociologist, I am interested in how larger social structures shape the lived experiences of individuals, and how those experiences are influenced by systems of power, especially around race, gender, and class. Over the last five years of my running and racing journey, I’ve had multiple conversations (formal and informal) and gathered survey data from over 200 African-American women about their motivation for running.

Through my qualitative and quantitative research, I have observed emerging patterns around hair and body politics, gendered racism, racialized connection with community and spaces, safety, running routes, heterogeneity of blackness, social class, and running in a racial hostile time of black lives matter, say her name, and the Trump era.

As one of the co-ambassadors for Black Girls Run! Boston chapter, I received an invitation bib to run the marathon, this was in February. My thoughts, do I do this?

There are two ways you get into Boston. Run a marathon with a qualified Boston time to get in or run for a charity, where you have to raise anywhere between $5000-$10,000 and still train. I was doing neither of those things. I had this great opportunity that I couldn’t let pass. To run the Boston Marathon, research Boston Marathon culture, and use this a vehicle to train for my last two continuous states (Idaho and Wyoming which I will be running in May and June), I had to jump on it.  There are a couple of issues that I thought about:

First issue, Boston is not cheap. You pay for eliteness. Everyone has to pay close to $400 to register. It doesn’t matter if you qualified, are running for charity, or received an invitation bib, everyone pays. When I ran in the Paris Marathon, that was around $150. It costs to be a recreational runner but some cost a lot more than others. I won’t even go into how expensive it is if you have to fly, pay for hotels, and food, etc.

Second issue, the 50th anniversary of women running the Marathon. I was curious of how women were celebrated. Walking through the Expo and looking at the Runner’s guide, I did not see African American women. Marilyn Bevans was the first African- American women to run the Boston Marathon and finish in under three hours. She was also the first known women of color to complete the Boston Marathon.  In 1977, she came in second place. I did not see Indigenous women runners, Asian or Latinx female runners. In other words, the stories of women runners, were mostly white.  Knowing the history of Marilyn and other black women Boston Marathon runners, I felt that I was continuing their legacy. That was a point of pride. 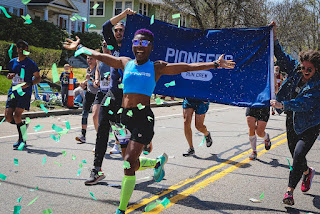 Third Issue: Boston is an international running city but it is still racially segregated. The city has a racially diverse population but the residents are racially segregated. Boston has a complex history of race relations, from Busing Segregation of the 1920s, the false accusations from Charles Stuart that claimed a black man killed his wife and unborn child, to sports greats like Bill Russell, who played for the Celtics and the racism he encountered in Boston. All of that to say, Boston has not fully recovered from its past and is still dealing with race relations in the present.

Fourth issue: Connection with Black Unicorn Marathoners. The Black Unicorn Marathoners was formed in April 2015 to be a support system for each other. The Boston Athletic Association (BAA) sponsors and supports events where black marathoners could gather together to network, greet, celebrate, and support each other. In a sea of over 30,000 it is good to know other runners whom you might not see but know they are running the course with you. They have similar intersectional experiences with running like you as well. 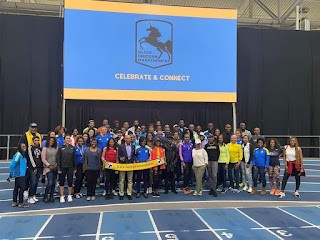 I was able to attend the meet in greet at the Reggie Lewis Center in Roxbury (the historic hub of the black community) and meet my fellow black marathon runners. The joy to see those faces, hear their stories and experiences is something that I would not get if I didn’t know there was a central gathering place. We were all celebrated.

The community of black runners spilled over into race day.  The few black women I saw running in my running wave, we gave each other smiles, thumbs up, and hugs. One woman said “you got this sis” and kept going. I made sure to give extra words of encouragement to the black women I saw.  The cherry on top, besides running through the finish line was seeing the running groups of color, such as Pioneers and Trailblazers on mile 21 celebrating and supporting the runners in their running group and other runners of color. This was my Boston Marathon experience. 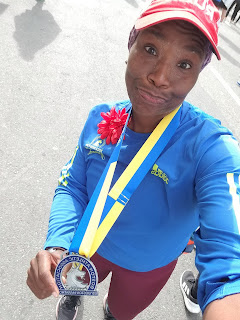 PS. What do you think? Other Boston Marathon histories or stories you’d highlight?]