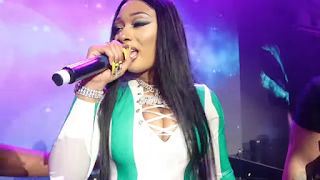 The Brutalization of Black Women in American History, Society and Popular Culture

“Black women are so unprotected…It might be funny to y’all on the internet and just another messy topic for you to talk about but this is my real life and I’m real life hurt and traumatized.”

Historically, African American women have been made subject to egregious levels of fetishization, appropriation and brutalization in U.S. society and the American popular imagination. From Mammy to Sapphire, the figure of the Black woman has gone unprotected—Black women’s bodies have gone unprotected—while white Americans consume and commodify Black cultural identity in the process. Historian Danielle McGuire, in her groundbreaking text At the Dark End of the Street, has assiduously demonstrated how Black women were sexually assaulted with regular occurrence by white men across the American south from the Reconstruction Era through the rise of the modern Civil Rights Era. More recently, Breonna Taylor was slaughtered while asleep in her bed. She did nothing wrong. Her body shot eight times and, near death, she was reportedly not offered immediate medical attention for her injuries. “Black women are so unprotected” in this society and culture as rap artist Megan Thee Stallion recently observed, following a gunshot wound she received at the hands of a male assailant.

Toni Morrison in her important text Playing in the Dark: Whiteness and the Literary Imagination (Harvard University Press, 1992) argues that (white) American identity was constructed “against the black shadow” or in relation to derogatory ideas about Blackness. White people like to “play in the dark” with Black bodies and Black culture including in literary, social, and popular cultural contexts. They play in the dark as if in a macabre dance with Blackness illustrated through fetishization and appropriation while, at times, killing the Black body in the flesh. This extends to appropriating the language of Black protest as exemplified in Portland’s white "Wall of Moms." These cosplaying revolutionaries are ultimately dangerous in the end because the focus in mass media always reverts to the white body in these moments or the humanity of those who play as opposed to that of the Black woman’s body within the larger landscape of mass culture.

In this theater of the macabre, Black women’s bodies have been the most unprotected on the account of gender and race. This essay is a brief look at representations of Black women in American popular culture from the lynching of Laura Nelson to the most recent observations of Megan Thee Stallion and the brutal murder of Ma'Khia Bryant by a white cop. I focus here on the brutalization, fetishization and appropriation of Black women in American history, society and culture by thinking about how whiteness thrives off of the degradation of Black women’s bodies.

The rise of Jim Crow and lynch law in the early twentieth century witnessed the public degradation of the Black body with the brutal murder of Black women such as Laura Nelson and Mary Turner. Nelson and her twelve-year-old son were lynched on May 25, 1911. The Nelson’s were accused of stealing a cow from a local white farmer. Nelson’s son, though accounts vary, allegedly shot a member of a white mob who stormed the family’s home in pursuit of Laura’s husband (who initially had been accused of theft). Laura Nelson’s dead body appeared in photos of lynching and on postcards in the early twentieth century. Nelson was brutally lynched for fighting back against white racial oppression. Her death commodified and sold on a postcard. Postcards of lynching became a regular part of American popular culture at the turn of century as James Allen has demonstrated in his riveting photo exhibit "Without Sanctuary: Photographs and Postcards of Lynching." These postcards of lynched bodies were kept as collectibles, distributed through the mail and saved as souvenirs forever etched into the popular imagination. Turner was lynched while eight months pregnant on May 19, 1918 after speaking out against lynching and the murder of her husband. African American visual Meta Warrick Fuller's sculpture “In Memory of Mary Turner: As a Silent Protest Against Mob Violence” was created to speak back against white vigilantism a year later in 1919. These cultural artifacts—postcards and sculptures—are dueling in the dark. Fuller’s work is an act of protest and reclamation, while the postcards of lynching are the product of depraved minds who defined their identity upon the bones of the dead. 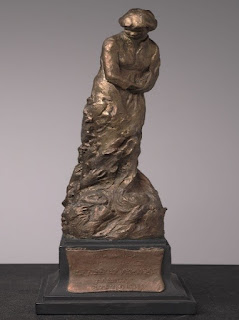 There were a host of Black women visual artists in the New Negro Era who like Fuller fought against the dark and fashioned respectable images of Black humanity including Laura Wheeler Waring and Augusta Savage amid the rise of filmic stereotypes of Black womanhood. Warring’s painted dignified images of blackness including portraits of Marian Anderson, Jessie Redmon Fauset, and Alice Dunbar Nelson. Savage, a sculptor like Fuller, depicted Black history and culture with works such as “The Harp” and “Gamin.” It is also pertinent to note here, as well, that the Black Blues women of the New Negro Era such as Glady’s Bentley were gender-bending in top hat and tails long before Madonna graced the stage of the MTV Awards. 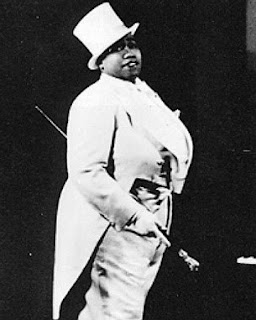 Historian Crystal N. Feimster in her book Southern Horrors: Women and the Politics of Rape and Lynching (Harvard University Press, 2011) notes that roughly 200 African American women were lynched between 1880 and 1930.

The Civil Rights-Black Power Era brought further indignities to Black women as exemplified in the testimony of women such as Fannie Lou Hamer. That said, Black women continued to make contributions to American society and culture as advocates for social justice and innovators of American music down to the present in the face of oppression. There has also been a regular appropriation of Black women’s music aesthetics from Big Mama Thornton to Grace Jones and beyond. Before there was a Janis Joplin there was a Big Mama Thornton and before there was a Lady Gaga there was a Grace Jones.

More recently, a big butt or excessively chemically induced tanned skin is deemed cute on a black-fishing (chemically altering one’s skin to appear/pretend to be Black on social media) white Instagram influencer or a Kardashian, while individuals such as Megan Thee Stallion or Cardi B are immediately called “ratchet” for twerking on stage. This race-playing by these black-fishing white women is to play in the dark. It is a theatre of the macabre. Meanwhile, Breonna Taylor is dead.

[Hettie Williams is Associate Professor of History at Monmouth University. She's written and edited a number of vital books on race in American history, culture, and contemporary society, and hosts the Intellectual History podcast for the New Books Network. We've been twitter friends for a long time and I'm so excited to share a bit of her work, voice, and ideas in this great Guest Post!]

Posted by AmericanStudier at 3:00 AM