May 27-28, 2017: Matthew Teutsch’s Guest Post: Five African American Books We Should All Read


[Matthew Teutsch is a scholar of American, African American, and Southern literature, and Rhetoric and Composition. He blogs at Interminable Rambling, as well as the AAIHS’s Black Perspectives site, and is a prolific Tweeter.]

I’m one of those people that typically remembers when and where I first pick up a book or record. I used to recall with fondness the time and place I got a CD. Remember those? I could tell you where I was the first time I heard Radiohead’s Kid A (in the car at a bank teller window with one of those cassette adaptors for a portable CD player). The same goes for most books that I read too. Typically, I stumble upon these books not knowing what to expect. At other times, I have some idea about what I’m in store for before I even begin to read the first page. I want to take you on a journey into the past where I will tell you about some of the books and authors I’ve read that I think need to be picked up, read and reexamined. My research focuses on African American literature, so this list consists of five African American works that we need to reconsider.

Even though I’m from Louisiana, I had never read any work by Bontemps until I graduated with my PhD. I had a professor who actually left Bontemps’ novel Black Thunder (1936) in my mailbox as he was decluttering his office. I read Bontemps’ narrative of Gabriel Proser’s failed slave rebellion then picked up his novel about the Hattian Revolution, Drums at Dusk (1939), from the library, and found God Sends Sunday (1931) in a Barnes & Noble in Columbus, OH, during a National Endowment for the Humanities summer institute on Paul Laurence Dunbar (more on him later). All of Bontemps’ work needs to be read, including his nonfiction. However, I would suggest that we begin by looking at his collection of short stories The Old South, a book that appeared the same year he passed away. The book collects stories about the South and the African American experience, layered with folklore, religion, pain, suffering, and joy. His most well-known story, “A Summer Tragedy” appears alongside stories such as “Heathen at Home” and “Mr. Kelso’s Lion,” two pieces that explore white liberalism and white supremacy. Along with these stories, the collection includes Bontemps’ essay “Why I Returned (A Personal Essay),” a piece that needs to be read and considered in relation to works by authors such as Ernest J. Gaines and Alice Walker who write about returning to the South, and even in relation to authors like Richard Wright who write about leaving it. Unfortunately, The Old South is no longer in print, so the only option to get a copy is to either find one in the library or order one online. I got lucky by purchasing a copy for under $5.00. My goal is to get The Old South back in print so more people can study his short stories along with his novels.

Every time the Friends of the Library had a sale in Lafayette, LA, I would be there ready to spend time searching through the countless books for ones that would set on my shelf. Without fail, I would always find first editions of Frank Yerby’s books at the sale, and I would always buy them. Yerby wrote 33 novels, numerous short stories, and poems. Even though he is one of the bestselling African American authors of all time, scholars have somewhat ignored him, or he becomes a guilty pleasure. Robert Bone once referred to Yerby as the “prince of the pulpsters.” To a certain extent, this label fits Yerby; however, we need to look past his “costume novel” exterior and peel back the layers that make up his works. For me, this began when I found Speak Now in a bookstore in New Orleans in the fall of 2015. I already had numerous books by Yerby on my shelf, but I had never read one yet. I couldn’t pass up buying another first edition Yerby, so I looked at the cover where an African American man and a white woman stared back at me as revolutionaries charged towards the right of the cover in the background. This was nothing like the “genteel” covers of his other novels. In fact, far from being, as some have termed him, placating to his white readers, Yerby attacks ideas of beauty, identity, interracial relationships, and postcolonial issues in a narrative that, while at times heavy-handed, clearly counters much of the criticism that critics and scholars lobbied against him. He followed Speak Now up with two books about an African man named Hwesu in The Dahomean (1971), which takes place entirely in Africa, and in A Darkness at Ingraham’s Crest (1979) which sees Hwesu as a slave in the Deep South. I would suggest, if you want to read Yerby, start with Speak Now and look back at his numerous “costume novels” such as The Foxes of Harrow (1946), The Vixens (1947), Benton’s Row (1954), and others to see the ways that Yerby confronts whites and subverts their ideas subtly through his narratives.

Unlike the other works on this list, I do not recall the exact moment I discovered Albery Allson Whitman. I do know that I found him while working on my dissertation. His work interested me partly because he wrote epic poems and explored the intersections between Native Americans and African Americans during the latter part of the nineteenth century. Not A Man, and Yet A Man (1877) focuses on the Midwest and Fort Dearborne, and The Rape of Florida centers around the Seminole Wars. Whitman was not the only author of the period to explore these junctions, Pauline Hopkins did as well in Winona: A Tale of Negro Life in the South and Southwest (1902). What struck me about The Rape of Florida, apart from it being about Spanish settlers, runaway slaves from Georgia, and the Seminole, was Whitman’s decision to write the epic poem in Spenserian stanzas. This, along with the epic nature, intrigued me, and led me to do more research on him. James Weldon Johnson claims Whitman as the best African American poet between Phyllis Wheatley and Paul Laurence Dunbar, and he appeared in numerous anthologies through about the 1970s when he, along with other authors such as John Marrant and John Russwurm started to disappear as well. Like other authors during the Nadir, we need to reexamine Whitman’s work. At this time, the most recent book that I know of that explores Whitman in detail is Ivy Wilson’s At The Dusk of Dawn (2009). Whitman’s entire oeuvre is important because it provides us with a link from earlier African American poets to Dunbar. In fact, Dunbar and Whitman both read at the World’s Columbian Exposition in 1893, and Dunbar had a signed copy of The Rape of Florida in his library in Dayton, Ohio.

In the summer of 2015, I participated in an NEH Summer Institute on Paul Laurence Dunbar. I applied for a couple of reasons; one of the main reasons was because I wanted to continue my work on Whitman, so exploring the connections between Dunbar and Whitman would be an important aspect of that project. Before going to Ohio, I did not realize how prolific Dunbar was during his short life. He started his own newspaper with the Wright brothers while in high school, wrote numerous volumes of short stories, wrote plays, and wrote four novels. This is not including his poetry, newspaper writings, and speeches. Most people only know a handful of poems Dunbar wrote, the ones that appear in anthologies or collections; however, to understand the full picture of Dunbar’s work, we need to look at everything. For me, the short stories are fertile ground for exploration, along with the novels. Like Yerby, three of his four novels center on white characters, while African American characters exist in the background, and The Love of Landry (1900) even takes place in the West, Colorado to be exact. While interesting in their own rights, The Fanatics presents readers with two families in Ohio that have a falling out when the Civil War breaks out. One family is from the North and the other is from the South. We need to consider this novel in relation to other reconciliation novels of the period. We can even think about this novel as a migration narrative; at one point, blacks come North to Ohio and experience inter and intraracial oppression. As Herbert Woodward Martin, Ronald Primeau, and Gene Andrew Jarrett say, the move and “[t]he resistance of Stothard and many like him forecasts the modern African American ‘ghetto.’”

I first heard about Attica Locke when she won the Ernest J. Gaines Award for Literary Excellence in 2103. For me, The Cutting Season caused me to think about the numerous ways that we examine and “preserve” history. Considering discussions surrounding the Confederate Battle Flag in 2015 and the current conversations around the monuments in New Orleans, Locke’s novel interrogates these sites and images of history that we continually encounter on a day-to-day basis. Specially, Locke explores how we react to the plantation homes that dot the Southern landscape, especially in Louisiana. Taking place right outside of Baton Rouge, on the River Road, The Cutting Season is a mystery novel where the past and the present collide. The narrative revolves around Caren Gray, an African American woman who went to college but returned to Belle Vie Plantation to manage it. Her ancestors, and those who owned her ancestors, lived and died on the same land that she oversees now. Throughout, Locke calls upon readers to question the language we use to describe the past and to interrogate the ways we remember that history. As well, Locke looks at the ways workers, specifically migrant workers, become exploited in the present. The woman that Caren finds murdered, Inès, is an undocumented migrant worker who left her family so she could make money to help them survive. In many ways, Inès’ story presents a similar narrative to that of Gaines in his own life and in his novels. Locke’s book needs to be read within the context of authors like Gaines, Walker, Morrison, and Sherley Anne Williams.

There are many more underread novels and texts that I could talk about here, but I think five is enough to get started with. Here are more texts if you are interested in reading more works that we need to reexamine or even begin to examine. I hope you enjoyed this list. Let me know what you think about these books and authors on Twitter @SilasLapham. 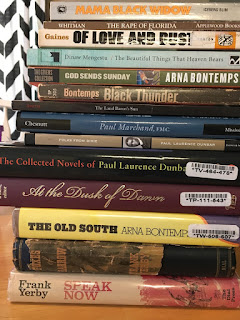 [Next series starts Monday,
Ben
PS. What do you think? Other books you’d share?]
Posted by AmericanStudier at 3:00 AM